Step 1: the rotations of tips

This is a very simple step, the tips are to be rotated and paired (unless they already are) with the colors of the central pieces - there are no algorithms to be followed – all is done intuitively. 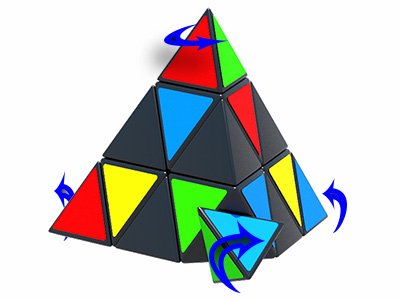 The goal is to form the one-color "Mitsubishi" logo on all the faces of the Pyraminx. The point is to successfully form this logo on at least one face of the Pyraminx, and the other three faces will be easily solved by the rotation of the fourth diamond.

It all comes down to using your intuition, with no algorithms to follow.
Take a good look at the following image! You may think that the two diamonds are completely solved and that all you have to do is to turn to the third one, but... 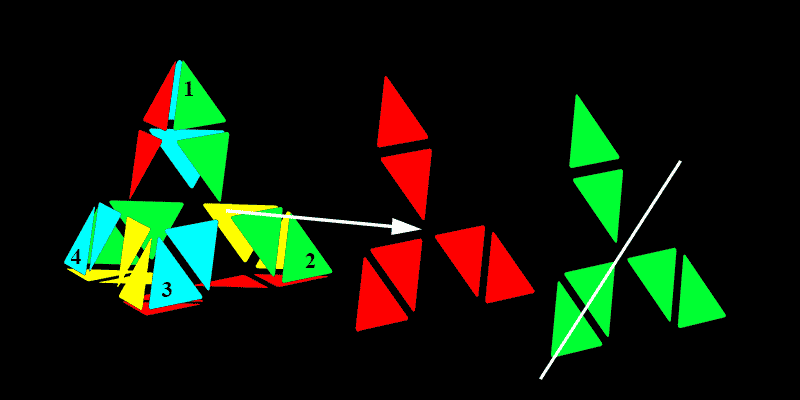 You are now faced with two options (unless one of the faces has an already formed "Mitsubishi" logo):
а) on the face that you want to solve, you can find the same color that appears on all three angles of that face and then you rotate the diamonds to pair the color, or...
b) you simply decide that you want to pair, for example, the yellow color first, then you find the three yellow angles and rotate these diamonds toward the face that these angles belong to.

By rotating the fourth diamond you will solve the other three faces.

The following video shows an example of solving the steps 1 and 2:

This results in solving 8 parts of the Pyraminx and we are left with 6 more two-colored side parts.

Next step No. 3 - how to solve the first layer of the Pyraminx